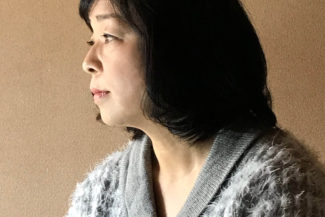 Noriko Takeshita was brought up from an early age observing the garden her grandfather, who was interested in Japan, made, along with his hanging scrolls and writings. She particularly liked his garden and ink drawings. She also had a strong yearning for things of beauty as a child who enjoyed poetry and literature while also being a dreamer. She first saw Japanese paintings during high school and became interested in them due to her attraction to their beauty. Noriko attended and passed the Tokyo University of the Arts Japanese Painting curriculum.

Noriko moved from the big city to Nagano Prefecture, a place situated at a high altitude, with beautiful plants, especially the beautiful flowers that bloom there, after she married. The area itself has abundant nature, providing a liveliness to those who see it, in a form that is unbelievably vivid and colorful and never grows old. She was so moved by this beauty she decided to take up painting once again.

Noriko depicts flowers that she was raised around and has fond memories of with mineral pigments, ink, gold and silver leaf and paints as well as mediums glued onto Japanese paper. The technique is referred to by its local name of Japanese painting in Japan, yet the use of glue is a primitive painting style which existed across the ancient world. Although it has a broad range of expression and an infinite number of possibilities, constant training is needed to learn proper techniques to become a master.

While Noriko has already taken plants and turned them experimentally into paintings through various expressions, she has recently sought to depict a more Japanese aesthetic with a sense of accepting transience and imperfection, the fleeting nature of beauty, elegance and subtle grace. This desire is based on her having seen a variety of artworks in India, Italy and France which she visited after graduating from university, while, conversely, her Japanese identity was awakened inside of her. She is particularly interested in the decorative nature of gold and silver leaf such as in the Rin school of Japanese painting.

Noriko has presented her works at group solo exhibits and has been uploading their photos to Instagram from 2018. She hopes her paintings provide people who see them with a positive sense of pleasure and happiness.